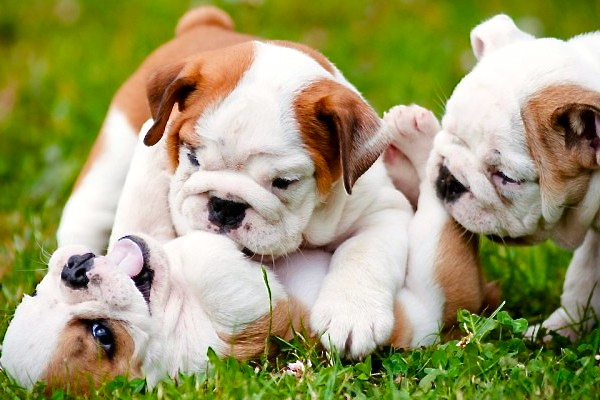 Dr. Ward authored a series of articles exploring the topics of dog-to-dog friendships and social play.

Fighting Without Biting: Dogs Have Many Ways to Resolve Conflicts. Camille Ward & Barbara B. Smuts. April-May 2011: 64-68.

A Sampling of Dr. Ward’s Research on Dogs

Greeting Behavior between Dogs in a Dog Park. 2020.

This study focused on greeting behavior between dogs meeting at a local dog park in Ann Arbor.  During a greeting, dogs would approach, engaged in olfactory investigations (i.e., “sniff”) and then depart.  Play occasionally followed greetings.  Dogs with a high, upright postures (indicating arousal) and dogs with low body postures (indicating anxiety or fear) at the beginning of a greeting would often shift to a more neutral, baseline posture by the end of the greeting.  This suggests that greetings may have a calming influence in some dogs.

Greetings between dogs lasted approximately 6.0 seconds.   Having baseline information on what is a natural, off-leash greeting time, as determined by the dogs themselves, can help guardians to make better decisions when introducing their dog to new dogs.  The 6.0 second rule may be a good baseline to work from as a starting point to help set dogs up for successful introductions.

Third-Party Interventions in Dyadic Play between Littermates of Domestic Dogs. 2009.

As part of my dissertation, I reported on intervention behavior among puppies in four litters of domestic dogs.  An intervention occurred when two puppies were playing and a third individual would intervene in their play.  A third puppy could intervene by biting, jumping on, mounting, etc. one of the two dogs engaged in social play.  Types of interventions varied by development stage, but the target of the intervention was usually the puppy already in the subordinate role (in a down position, on his back) at the time of the intervention.  This suggests that puppies may use interventions strategically to practice “offense behaviors” in a safe and playful environment.  Such practice may help structure relationships among group members over time, and it also gives the intervener the opportunity to practice socially facilitated behaviors (i.e., do what the other dog is doing by targeting the dog in the subordinate role), which can important for group-living social species such as dogs.  Such socially facilitated behaviors could have paved the way for synchronizing cooperative behaviors in early dogs.

As a chapter in my dissertation on dog behavior, I reported on puppy play in four litters of domestic dogs. I studied the social interactions of the puppies starting at 3 weeks all the way up to 10 months of age in one litter. Puppies started to form play partner preferences very early in development (prior to 7 weeks of age) and their preferences for play with the same individuals intensified over time. I also found that contrary to belief in some of the popular literature, puppies rarely played fairly—i.e., they almost never balanced out their play style (i.e., took turns being in the top dog/bottom dog roles). One dog in a play dyad (a play pair) was consistently in the top dog position (directing “offense behaviors” such as bites, jumping on his/her partner, mounting, chasing, etc.). However, the dog in the bottom role (i.e., receiving bites , being chased, being sat on, etc.) often continued to initiate play with other playmates who “dominated” them in play. Not everyone wants to be the top dog and some dogs appear content to be in the bottom-dog role when playing with certain partners.

Take home message: We don’t always need to break up play just because it looks one-sided. We should let the dogs decide. If we separate the bottom dog from the top dog and let the bottom dog go and she runs right back to continue play with her top-dog friend, then play between these dogs is probably okay. Another interesting find was that male puppies “soften” their play style when playing with females but not when playing with other males. It’s almost as if they will let the female “win” at play games in order to entice the females to play with them. MSNBC picked up on this finding and wrote an article based on my study entitled: “When Puppies Play, it’s Ladies First.” Even Cosmopolitan was intrigued with the research when they reported these findings in their January 2009 issue. Cosmopolitan magazine was the last place I ever expected to see the results of my dog research!

Can Dogs Judge the Difference between Quantities? Quantity-based judgments in the domestic dog (Canis lupus familiaris). 2007. 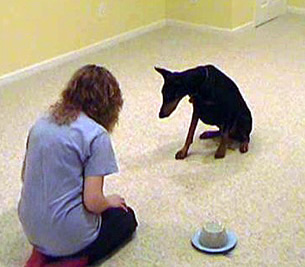 See a video clip of Acorn the Doberman at work judging differences between two quantities. In the clip, the experimenter puts down two covered plates: one containing 2 pieces of hotdog and the other plate containing 4 pieces. The experimenter first uncovers the plate to her right and allows Acorn to see the 4 pieces on the plate. The experimenter then covers that plate and next uncovers the plate to her left. Acorn visually inspects the plate containing 2 pieces of hotdog. The experimenter then covers the plate to her left, waits 2 seconds, and allows Acorn to choose between the two covered plates. In order to choose the larger quantity, Acorn has to be able to keep track of quantities mentally. This study is especially exciting because it shows that at least some dogs can perform on par with great apes (chimpanzees and orangutans) when solving quantity judgment tasks. In addition, dogs are able to form a mental representation of quantity and keep it in their mind when making optimal decisions (Acorn had to remember that the plate on the right had the larger number of hot dogs, even though she could not see them after the plate was covered). Such abilities might have helped dog ancestors avoid or confront competitors (depending on the relative sizes of the groups), find the best hunting grounds with the most food, and/or territories with the most mates.

Two published studies show that positive training methods are less likely to be associated with behavioral problems in dogs:

The Relationship between Training Methods and the Occurrence of Behavior Problems, as Reported by Owners, in a Population of Domestic Dogs. 2008. 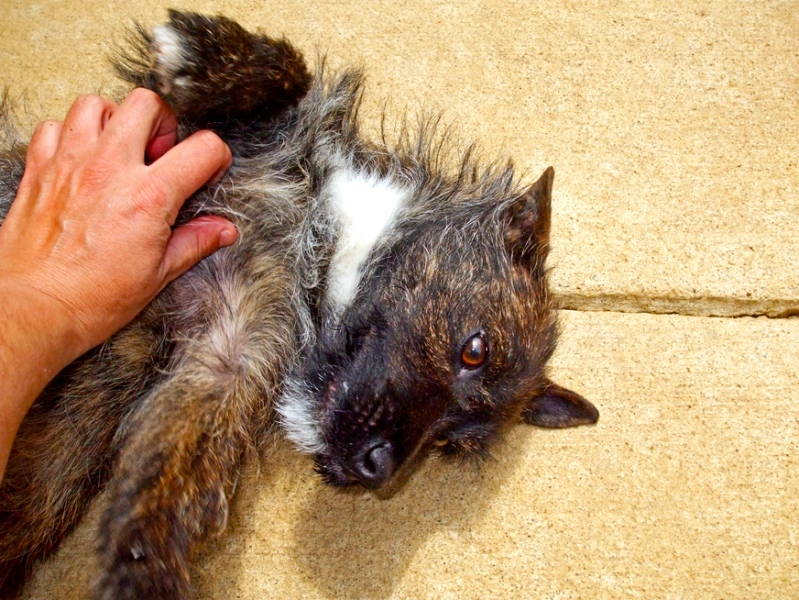 This study looked at confrontational training and behavioral modification methods used by people to curb undesirable behaviors (e.g., separation anxiety, aggression, fear and anxiety, barking, etc.) in their dogs. Unfortunately, some of these methods are popularized on television shows and recommended by “dog trainers” will little to no education in the science of how animals learn.

Some of the methods used by owners that caused their dogs to respond aggressively included: